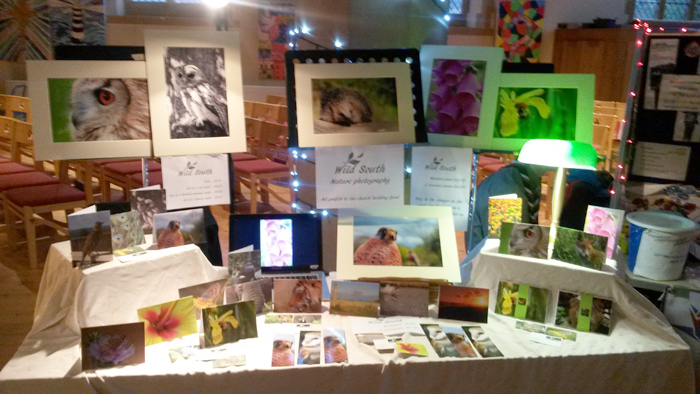 This weekend I took a plunge (or, rather, dipped my toe) in the world of commerce. I have thousands of photos on my hard drive, a tiny fraction of which are (I think) quite presentable, but I rarely do anything with them. So when I heard that my church was organising a craft fair, it seemed like a chance to be brave and show them to the world, and see if the world liked them enough to buy them.

The first step was to find some photos good enough to sell. This meant trawling through my archives, which was a time consuming but pleasant occupation. I narrowed it down to 25 photos, mainly of British wildlife. But I had no idea which of these people might buy.

I thought Wild South would do as a name for my enterprise, and I knocked up a logo, incorporating oak leaves, as oaks are my favourite trees. What do you think of it?

In the end I got 4 of each of the 25 photos printed as cards. I also got a set of business cards printed, with a different photo on the back of each. I  found a couple of bird images that would work as bookmarks, and got 50 double-sided bookmarks printed. I also picked 8 of my favourite photos to print out large, and mounted them. My plan was, if they didn’t sell I’d put them up at home (I’ve been meaning to do this for a while). I made up some themed packs of 3-5 cards.

Having never done this before, pricing was a bit of a stab in the dark. I knew what my costs were, but wasn’t sure how much mark-up to add – I wanted to make a decent profit for the charity, but didn’t want to be left with 100 cards at the end of the day.

After a dry run of setting up my stall at home, I was ready for the fair. I was relieved when I made my first sale of the day, and it was encouraging that it was a good one. I got lots of compliments on my photos. By the end of the day I had sold about half of my cards, and 4 mounted prints, but only 8 bookmarks. Some of the photos completely sold out. Owls, British mammals and pretty flowers all sold well, while some of my more exotic photos barely sold at all.

My business cards were very popular – people liked being able to choose which photo was on the back. And I did have more blog visits than usual this weekend, although I don’t know whether that’s connected. The other stallholders were very kind and encouraging, and Dr C helped out a lot. It was also a great opportunity to talk to people about wildlife.

It was a hard day’s work, but not unpleasant or dull. I’m not in a hurry to do another craft fair, and it’s not time to give up the day job quite yet. But I ‘d do it again to raise money for charity.

Anyway, here are the top selling images from the fair.

2 thoughts on “Entering the world of commerce”