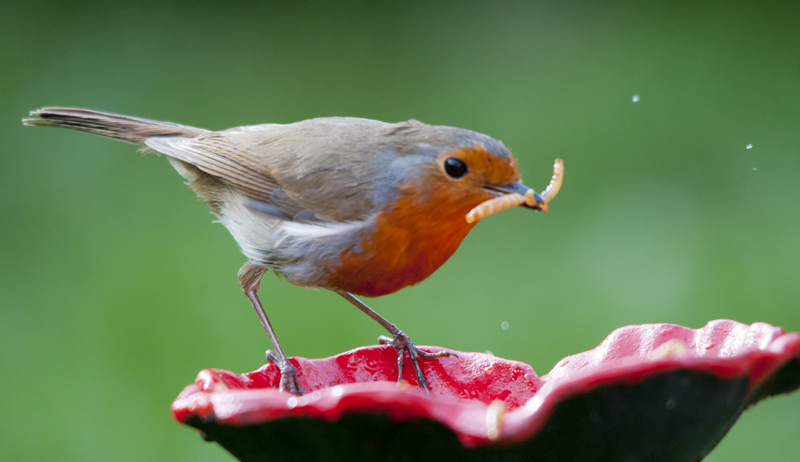 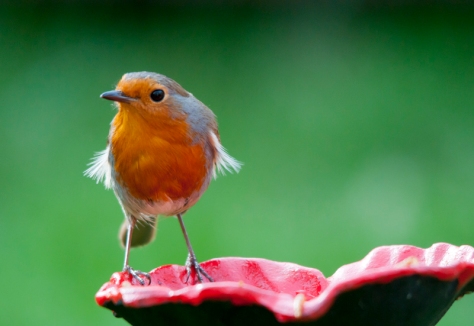 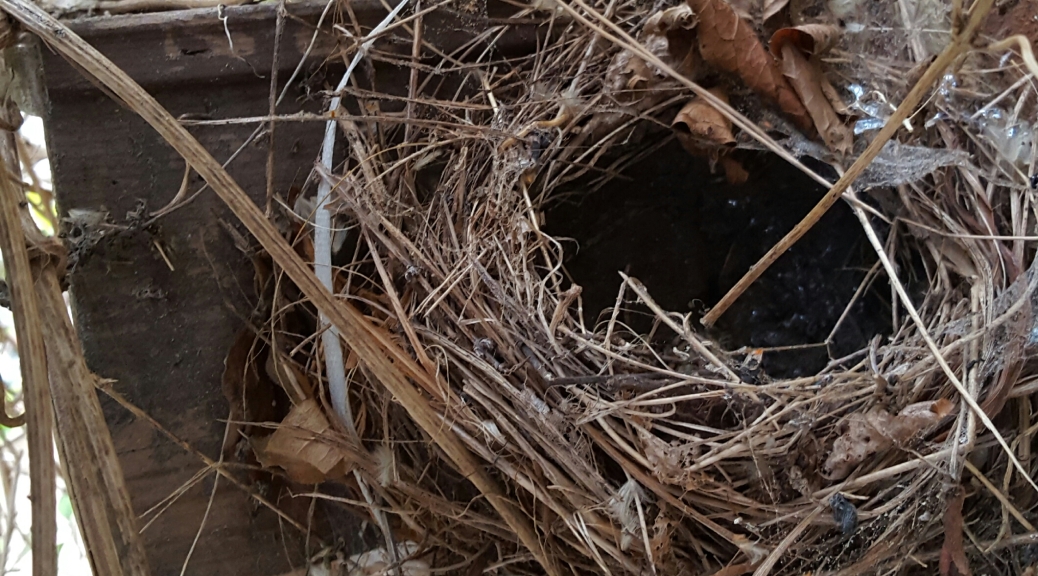 The mild weather of October has given way to a chilly November. Time to get ready for winter. So Dr C got the ladder out to take the camera out of the birdbox, which is hidden behind a tangle of clematis by our front door.

This year was disappointing for birdbox activity. We had a pair of bluetits who started building a nest, but they abandoned it before laying eggs.

So it was a little galling when he discovered a birds nest on top of the nest box. It looks like birds did nest this year, on rather than in the bird box. And all this time, it was easily watchable from our sitting room, if only we had known to look.

I am not sure what sort of birds nested there – it looks quite different from the many bluetit and wren nests I have seen, but they have usually been in a box, rather than freestanding. Any ideas? My best guess would be robins, given how frequently I saw them in the back garden this spring.

I’ve no idea what happened in this nest. Was it abandoned before any eggs were laid, like the one in the box? Did they lay eggs? Did the chicks fledge. I will never know. I would like to think they did, and that perhaps they will be back next year. I will certainly be keeping an eye out for them!

Do you have any ideas about what made the nest? 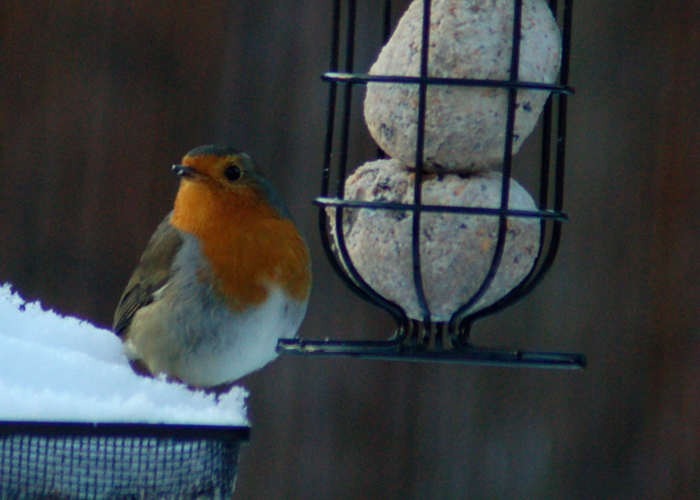 Other countries have fearsome eagles or majestic cranes as their national bird. Now, finally, the British public have decided that our national bird should be the…. Robin.

Almost a quarter of a million votes were cast in a poll to decide which should be the national bird of Britain. The shortlist of 10 included the beautiful barn owl, dazzling kingfisher, and incredibly rare hen harrier. But the humble robin was a run away winner, getting a third of the votes.

So why did the robin win? Here’s my guess. Robins are pretty common and widespread across the country, all year round. With their striking red breast everyone can recognise it, and sees them pretty regularly. It’s an egalitarian choice – you don’t have to be an expert or live in a particular place to see them. Their song is loud, drawing attention, and they’re not too scared of people.

Many gardeners will have had the company of a robin just a metre or two away as they work, the robin on the lookout for any worms that get turned over by digging. With patience, robins can even be trained to take food from your hand.

The results of this poll remind me of the poll to choose our national animal a few years ago. The humble hedgehog won – another animal that town and country dwellers alike can encounter in their gardens, although sadly hedgehog numbers are declining rapidly, meaning many people haven’t encountered one for years.

Some people have criticised the choice of the robin, as robins will fiercely defend their territory. Others campaigned for the hen harrier to win, in the hope that raising awareness of the plight of the bird would help to conserve it. The hen harrier has been illegally persecuted by gamekeepers for years. Last year only four pairs of hen harriers successfully bred in England.

But I think the robin is a good choice. It’s fiesty, easily identifiable and attention grabbing. Like the hedgehog, it’s one of few wild birds and animals one can get really close to. Still, I have to admit it didn’t get my vote – I plumped for the blackbird for its song that gladdens my heart each morning. 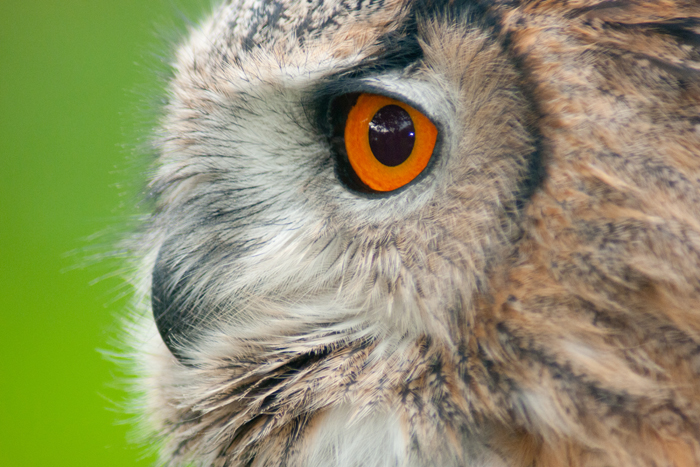 Christmas really must almost be here. This week we had our first Christmas card (thanks Aunty M!). It was a sweet image of two little birds, snuggled up to each other on a snow-covered branch. You can picture it, can’t you?

Except you’re wrong – it’s not two little robins, it’s two bluetits instead. This is a bit unusual for Christmas cards – robins really seem to have cornered the festive bird market (if you exclude turkeys!). But there’s no reason why bluetits (or other birds) shouldn’t get in on the act. 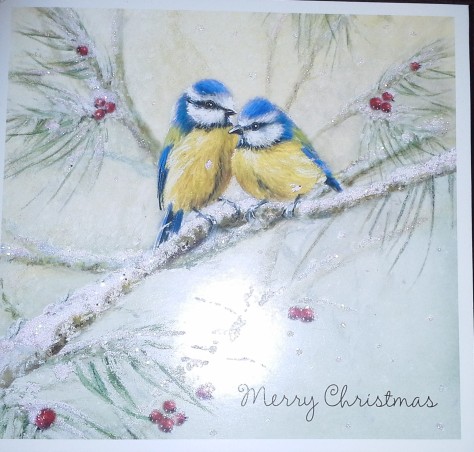 We see robins most of the year in our garden, although I don’t know if the one we see in winter is the same as the one we see in summer. It’s rare for us to see more than one, as they are quite territorial. Quite a lot of Christmas card artists seem unaware of that, and paint idyllic scenes with two or more happily perched in a tree. If that happened in real life there would either be breeding or fighting involved, which is less appropriate for a Christmas card.

We also see bluetits throughout the year, and are more likely to see several at once, so perhaps this card is more realistic than some of the robin ones I’ve seen.

Generally we see most of our birds more frequently and numerously in winter, when fewer other food sources are available, so Christmas card designers have plenty to choose from.

If you asked me which of our garden birds I associate most exclusively with winter, it would have to be the pied wagtail. Wagtails only tend to visit our garden when it’s very cold, and usually snowy. They’re not as colourful as robins (or bluetits), so perhaps that’s why they don’t feature on many cards.