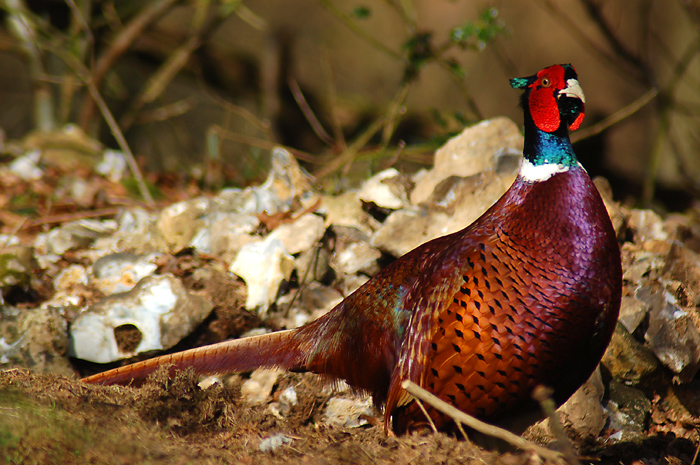 One of the first things I did when I arrived at the holiday cottage a few weeks ago was to make a tour of the garden, looking for signs of wildlife. The signs were promising.

Behind an old barn was an area of, what looks from the map to be old orchard gone wild. Running through it was an animal path. On and by the path were snuffle holes, and the remains of spring flowers with the bulbs bitten off and eaten. It looked badgery to me, so I set up my trail cam in the hope of catching some footage of them passing through.

For the first few days, when the camera was set to record only at night, I didn’t get many triggers at all. I changed the setting to 24 hours, to see if anything interesting was visiting during the day (we’d spotted deer across the field). I got plenty of triggers then. All of one particular creature, but sadly not the one I was hoping for…

I’m not the world’s biggest pheasant fan. They’re strikingly handsome, but incredibly stupid, inclined to forget they can fly when faced by a car. They’re a danger to reptiles, but heavily protected by the hunting estates that release millions each into the UK wild each year for rich people to shoot.

I still think the path looked badgery, and maybe badgers do use it sometimes, just not the week I happened to stay there. Pheasants are pretty omnivorous, so it may well have been them eating the bulbs. But I’m not sure they’d make such a distinct path (whereas badgers are creatures of habit, and will follow the same path even when the obstacle it skirts around has been removed). Do pheasants make paths? Or was I just unlucky to miss whatever did make the path?