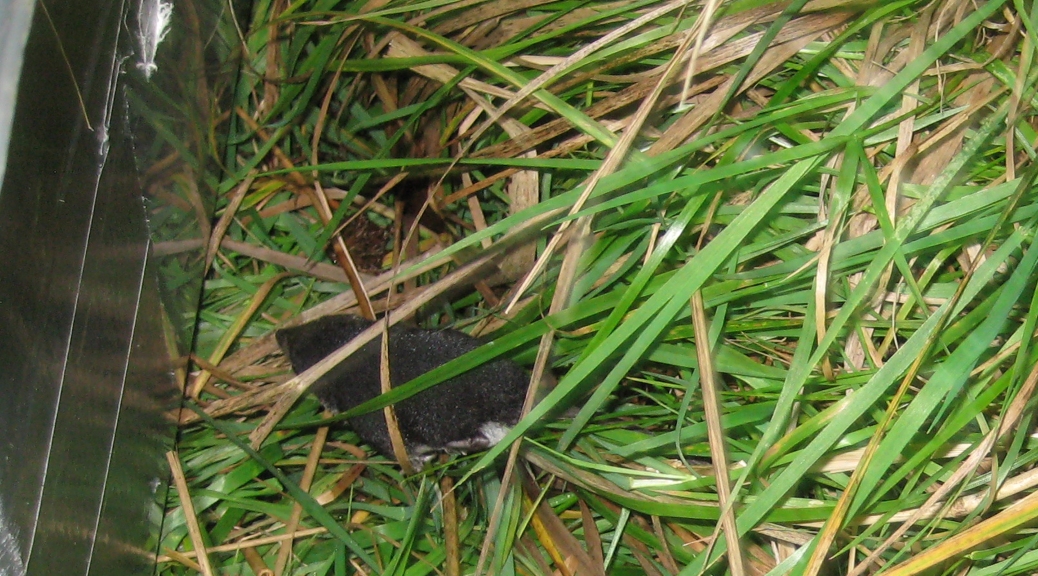 Those of you who have been following my blog for the last 18 months will know that I have not had any success at seeing water shrews, despite numerous attempts.

I had read that the best place to see water shrews was in clean streams and watercress beds (not that they eat watercress, but the insects they so eat need nice clean water, so are often found in watercress beds). So my first attempt was in Hampshire, where they grow lots of watercress. I ended up seeing water voles instead (they’re even rarer, and rather partial to a bit of watercress). Despite returning several times, I never saw a water shrew there (maybe the otters, which I also didn’t see, have eaten all the water shrews).

When I heard that at least one water shrew lived on one of the ponds at Surrey Wildlife Trust’s education centre, I got permission to spend some time standing silent and still by the pond for a few hours. It was a rather meditative experience, but still no sign of the shrew. Undeterred, I tried again a different day. This time I think I got a bit closer, as I heard a squeak that may have been a water shrew, but didn’t get a glimpse.

That approach was also not working very well, so I put my quest for water shrews aside for a while. Imagine my feelings when the reports from the first couple of weeks of harvest mouse trapping featured several water shrews, yet I was unable to attend due to work.

When I finally got out to help with the harvest mouse trapping it was at a couple of sites where no water shrews (or harvest mice) had been found the week of the survey, and my session did nothing to change that record.

Finally, on the third harvest mouse site I helped out with, my luck changed. The first animal we found was a harvest mouse, and not long after I got to see my first water shrew.

Water shrews are the biggest of the British shrew species, and are usually darker than other shrews, with a silvery underside. I had my hopes raised then dashed a few times at other sites when we happened to catch a common shrew that was darker than normal. But you can really make sure by looking for a fringe of bristles on the back legs and under the base of the tail.

Like all shrews, water shrews are insectivores, and have noses like Wombles. They live life at quite a pace, having a fast metabolism. They’re probably the most striking British shrew, with their dark back and light underside. I didn’t manage to get a good photo, as I didn’t want to disturb the animal more than necessary. You can just see a dark shape disappearing into the foliage.

So, I finally ticked water shrews off my British Animal Challenge list. I wonder what species I will see next…

One thought on “I finally see a water shrew”