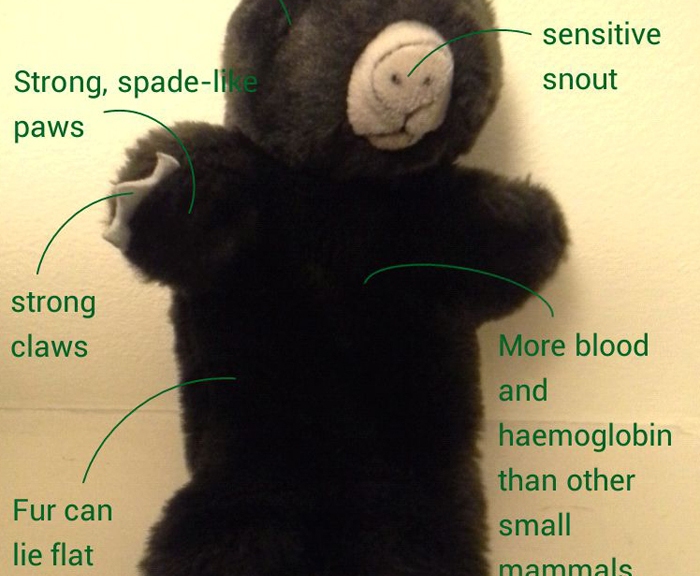 They are one of our most common and widespread mammals, but few people will ever see a live mole. I think this is a shame, as they are fascinating creatures, perfectly adapted for their subterranean lifestyle. I haven’t yet seen a live mole, so don’t have any photos to show you. Luckily my friend Moley has agreed to help show you what makes moles so great.

Talpa europaea, the mole we get in Britain, is surprisingly small in real life, usually between 11 and 15 centimetres long, with a short tail.

Moles are insectivores, and have a long, pointed, mobile nose like hedgehogs and shrews. The sensitive hairs on their noses help them to detect food. Their favourite food is earthworms, bit will eat other insects (and sometimes other small creatures as well).

Sight isn’t all that useful in dark tunnels, so moles have tiny eyes (1mm across), but they can tell the difference between light and dark. This may be to help them detect when intruders break into their tunnels from above.

Moles don’t have external ears (presumably because they’d just fill up with mud).

Moles are usually dark furred, like Moley. But as colour doesn’t matter too much in dark tunnels, other colours (like white or light brown) are not uncommon. Their fur is short, velvety, and can lie flat in any direction, to help them back up through narrow tunnels.

Digging is what moles do best. Their powerful, spade-like front paws help them shift lots of earth quickly. A mole can dig around 20m of tunnels each day. Moley, being bigger than most moles, assures me he could manage 30m easily.

There is less oxygen in the air of underground tunnels than above ground. To make up for this, moles have more blood than other similar-sized mammals, and twice as much haemoglobin (which carries oxygen in the blood).

Moles leave obvious signs of activity, creating mole hills from the spoil from their tunnels. This makes them unpopular with gardeners, but unless you’re tending a lawn for competitive bowls, croquet or tennis, I can’t understand people wanting to kill moles. It’s easy enough to rake the molehills away.  Their tunnels also help aerate the soil.

Moles spend most of their lives below ground, but they do sometimes come up to the surface. Your best chance of seeing one is in June, when youngsters are heading off to find their own territory. I hope that I will get to see one someday.