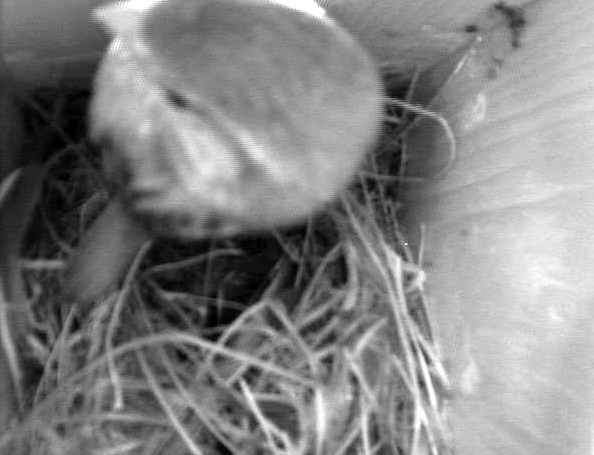 More good news – both house sparrow chicks have now fledged. The last couple of days they’ve looked like proper sparrows, rather than merely cavernous beaks. There’s been lots of wing stretching and peering out of the hole.

The first chick fledged on Monday morning. The other chick seemed a bit reluctant to leave the nest. She waited until Tuesday morning, spending quite a bit of time peering out the hole, then hiding at the back of the nest before finally summoning up the courage… The parents didn’t waste much time after the chicks had left, before coming in to get it ready for the next brood.

This video shows the two chicks together in the nest, just before they fledged. It then goes to show the second chick fledging on Tuesday. Finally there’s a bit of the daddy doing some housework once the chicks had left.

It’s been very satisfying to watch the chicks’ progress each day. These are the first chicks that have been successfully raised in our camera box. In previous years we’ve had blue tits build partial nests then give up. The closest we got was when a large brood of blue tit chicks hatched, but sadly each day another one died, until there were none left. (It was a very wet spring that year.)

House sparrows can have several broods each year, so hopefully we may get to see some more.