As part of my British Animal Challenge, I’m trying to see every species of animal that lives in the wild in Britain. There are several different types of ponies on that list, that, though they have owners, are left to wonder wild all year in some of the few remaining areas of wilderness. Exmoor ponies are one type, so a couple of weeks ago I went to see some. If you haven’t been to Exmoor before, I’d recommend it – beautiful steep valleys and high cliffs looking out over the sea. The park itself covers 267 square miles.  Very wild and romantic, inspiring some fine literature over the years.

Exmoor ponies are well adapted to their environment – thick coats that channel rain off, stocky build, fleshy eyelids that help insulate the eyes and keep the rain out, and a frost cap on their tales that channels water away from their underbelly. (It rains a lot in the South West). 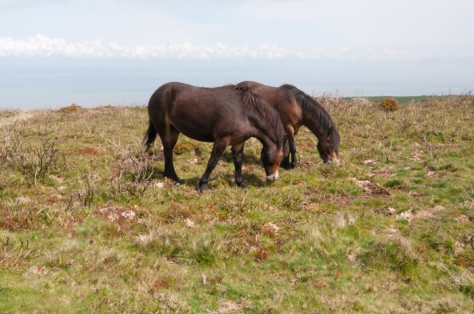 Our expedition to see Exmoor ponies started off (as all good expeditions should) with a good meal. We broke our journey from South Devon to Exmoor at Exeter, to dine at Michael Caines’ restuarant opposite the cathedral. Very tasty and surprisingly affordable. Suitably refreshed, we drove north towards Minehead via a rather indirect route to maximise our chances of seeing ponies, on a kind of safari-drive. Sadly, the only equines we say were in fields, wearing cosy blankets, so not what we were looking for. We couldn ‘t dawdle for too long, as we were expected at the B&B, so had to postpone the search til the next day.

Our second attempt started with a hearty breakfast (porridge and eggs benedict). We headed out onto the coast path (on foot), eyes peeled for reptiles and ponies. The path starts with a long hill, through a wood alive with the songs of hundreds of birds. At the top, we came out onto open moorland, and stays fairly level for quite a way. Fairly soon we saw some Exmoor ponies. They were much more uniform in appearance than the Dartmoor ponies we had seen earlier that week. We saw several groups of ponies along the 10 mile stretch of coast we did, but no sign of reptiles. 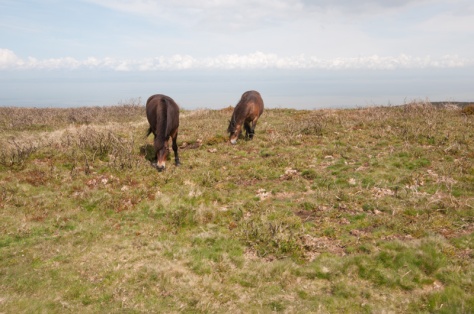 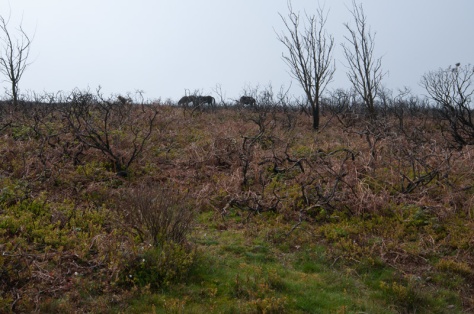 There are around 500 Exmoor ponies wondering wild in Exmoor National Park. There are concerns that the Exmoor pony breed is threatened, as other types of ponies wondering wild on the moor interbreed with them (a similar problem to that faced by the wildcat up in Scotland). Solving this problem is difficult, as it would need the cooperation of many different landowners and other groups.

One thought on “Exmoor ponies”